About The Big Infinite 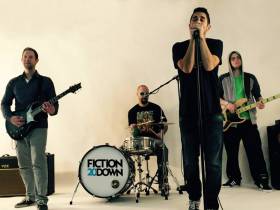 Big Infinite started their career in the music business under the name Fiction 20 Down. Their first 4 years together were a whirlwind of national tours, studio productions and music video shoots. Along the way they accumulated numerous awards, including ‘Breakout Artist of the Year’ at the Maryland Music Awards, and they even charted in the Top 10 on iTunes. The band was creating some real buzz within the music industry, when suddenly, everything came to a halt. While on tour in Florida, Jordan Lally, the band’s singer-songwriter, received word that his father’s battle with clinical depression had culminated in suicide.

Jordan, and his bandmates DJ Fritzges and Andre Toney, took a step back from the music business, focusing instead on their own mental & emotional health.

When the band reconvened, something had changed. The new music they were creating was raw, vulnerable, and somehow more authentic than anything that had come before. They were a different band, and so to reflect that, they changed their name to the Big Infinite.

They left behind the traditional path of the music industry, instead using their original music in service of mental health awareness and suicide prevention at concerts, schools, conferences and community events. Through music and storytelling, the Big Infinite shine light on their struggles, and the various roads they’ve traveled to healing. The mission of the Big Infinite is one of connection and self-love - because together, we have the power to heal.